Almost 2 years ago, I sold the majority of my belongings, packed what was left into a suitcase and a backpack, carefully weighed everything, threw some more things away, weighed it again and headed to the Brisbane airport to board a plane that would ultimately take me to Finland. The culture, weather, lifestyle and the people couldn’t be anymore different to what I was used to in Australia. While I love living in Finland, life hasn’t always been rainbows and unicorns. Here are some of the challenges I have come up against since my arrival here!

I know, I know, everyone says this. And for good reason! When I visited Australia last year in July (which is winter and usually the coldest month), the weather was still a balmy 20-25 degrees. Back in Finland, the summer weather barely cracked double digits. I was definitely happy for my warm, summer escape!

15 cases! Seriously?! I didn’t even know what a case was before I moved to Finland. My attempts in Australia to learn Finnish before I came failed miserably, as I had never seen grammar so confusing and difficult before, and my Finnish boyfriend had no idea Finnish even had grammar rules. 2 years after moving, and I’m still not fluent.

I took the picture at the bottom of this article on my way home from the bus today. At one point, I actually got stuck going up a slight uphill, and slid back down. And people think Australia is dangerous!

Even though I have a Finnish driver’s license, I’ve only driven a handful of times (at 11pm at night, when nobody else was around). Not only is driving on the other side of the road difficult for me, but some of the road rules here I will never understand. Like not indicating on the roundabout. Or how you might have to give way to cars coming from your right, but not always, only if there is no give way or stop sign. But you can’t know this until you come to the intersection. Crazy.

Being a northern country with extremely hostile winters, I understand it’s pretty difficult to grow fresh produce here. But boy do I miss fresh local fruit and vegetables, which is easy to find in Australia. Finland’s aversion to fat also means it’s difficult to find pork with the skin on (which is basically a delicacy in Australia). There are some other things I miss too, like Tim-Tams (I’m down to my last packet, so we are in ration mode), strawberry nesquik, salt and vinegar pringles and candy that doesn’t burn your mouth and make you face pinch. 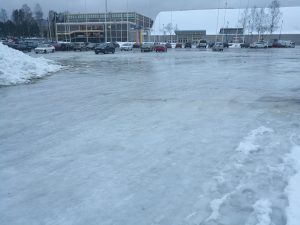